The purpose of the script provided by Allo-Media is to modify phone numbers in the DOM, as such, a reflow, and thus a repaint is performed for each replaced number.

Allo-Media's script enables an option to store data in localStorage instead of cookies. If the user's browser does not support this feature, cookies will be used by default. 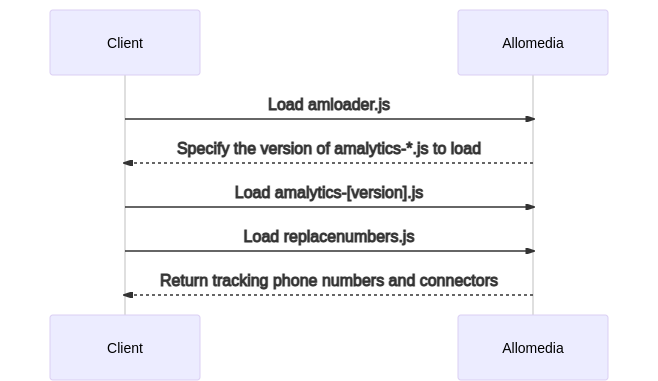 The script also performs queries to a logging service hosted by Allo-Media for monitoring purposes.

The only timers used are some setTimeout(/*function*/, 0); in order to put certain functions in queue.

The script is supported by at least the last two versions of the main browsers.

At present, there are two modes of operation:

(*) Those files are neved cached.

The script creates an AlloAnalyticsObject in the global scope, which contains the name of the real object, which can be customized. This second object is then created, and is named am by default.

The customization of the name of this object is described later in this document.

No other object or function in the global scope is redefined.

All the requests made go through the https protocol.